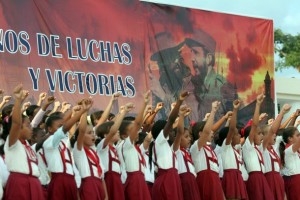 HAVANA – JANUARY 8: Cuban pioneers cheer revolution slogans under a photograph that shows Fidel Castro (R) and Camilo Cienfuegos, commander of the Revolution, during a political act to commemorate the arrival of the so-called victory caravan, re-enacting the triumphal 1959 entry into Havana by Cubas Revolution leader Fidel Castro and his rebels, exactly 50 years later, on January 8, 2009, in Havana, Cuba. Fidel Castro, who ruled as Cuba’s President since coming to victory in 1959 until two years ago, when illness forced him to hand over power to his younger brother Raul Castro, remained behind the scenes during the celebrations of the 50th anniversary of the Revolution. (Photo by Sven Creutzmann/Mambo Photo/Getty Images) 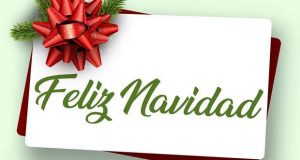 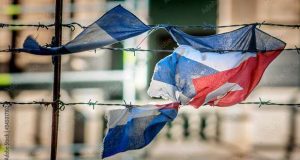 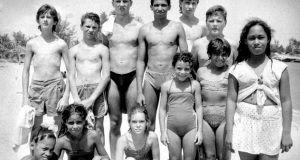